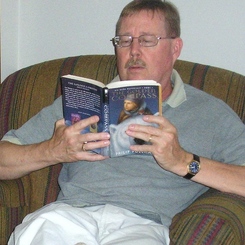 Mr. Brodbeck in his reading chair.
Mr. Brodbeck is a 1968 graduate of Alma High School.  He received B.S.el.ed from Martin Luther College in New Ulm, MN.  His first teaching job was in Garden Grove, California.

While living in California, Mr. Brodbeck earned an M.A. in Instructional Media from California State University, Long Beach.  He was awarded an M.A. in Library Science from CMU in 2002.

He came to AMS in 1989.  Since then, he has taught in every grade at AMS.  He has been the LMC Director since 1999. Beginning in 2006, Mr. Brodbeck was named Director of the Alma High School IMC. He spends parts of every day at both AMS and AHS.

Mr. O'Neill with his sons Colin and Aidan.